Let us help you

They say Brazilians are born with samba in their blood and Havaianas on their feet. Amen to that. Samba is a type of music that has become synonymous with joy, fun and color. No wonder it’s the soundtrack to the biggest, loudest festival on the planet: the Rio Carnival.

It was in Rio de Janeiro that the African rhythm started to be popular at the dawn of the twentieth century. Bit by bit the locals were carried away by the samba beat. The first recording was made in 1917, "Pelo Telefone" by Donga and Mauro Almeida. Samba started to really sweep over the world.

With such a huge, popular hit across all social classes, samba became a symbol of nationhood and unity. New cadences grew and mixed from those African roots, like samba-exaltação, samba-enredo, and samba de roda, which is on the UNESCO World Heritage List.

We at Havaianas figured a centenary doesn’t happen every day. So on 28 June 2017 we threw a very special bash to celebrate one hundred years since that first samba recording. The capital of love, Paris, was turned into the capital of joy. Havaianas organized an event where samba took center stage from beginning to end. The party was held in Alcazar restaurant. Guests, some of them the most important influencers in Europe, were welcomed by musicians and dancers who also gifted them with a traditional Brazilian charm bracelet.

Guests preserved the event with plenty of pics uploaded to the social networks while swaying to a band with loads of rhythm and an even better name: Mosquito. To top it all off, the Brazilian DJs twinned with French DJs for a perfect blend.

Memories left on the cloud are nice, but a souvenir you can hold is nicer. All guests left with an incredibly special samba kit: an outsized matchbox containing a pair of Havaianas with a design showing different schools of samba. 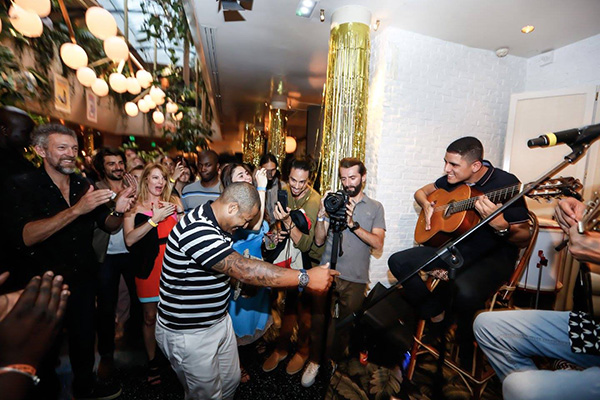 The Samba&Havaianas nights were such a hit that at the end of August, more will be held at the Onda Carioca de Vicente festival in Biarritz, a contest held August 20 and 27. Then on September 1 they’ll be back in Paris, swaying hearts once again.

HAVAIANAS IN THE ‘CITY OF ROCK’

IPE and Havaianas working for the biodiversity